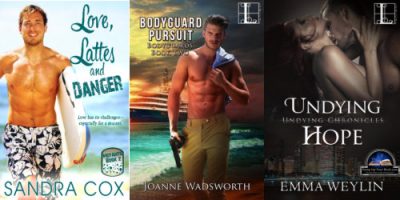 It’s a dirty job, but some mutant’s got to do it…

Joel Eisler is a mutant with special talents. He can detect an oil leak in the ocean simply by tasting the water. Because of this unique ability, he’s been purchased by a large oil company, along with his dolph sister, Amy. The upside of spending his days and nights in the ocean is that it gives him the opportunity to save the lives of his brother dolphins. The downsides are life as a closely monitored slave—and that he can’t be with Piper, the dolph-girl he loves…

To make matters worse, Joel discovers the lab he grew up in has extracted his sperm and Piper’s egg and created a baby, and his handler, Craven, is plotting to kidnap Amy for more experiments. Now Joel must rescue the infant, bring her to Piper, and find a way to save Amy. And if that’s not enough of a challenge, he needs to convince Piper she belongs with him instead of her all-too-human boyfriend—if Craven doesn’t get to them first…

ORDER INFORMATION
Love, Lattes and Danger is available for order at

Multi-published author Sandra Cox writes YA Fantasy, Paranormal and Historical Romance, and Metaphysical Nonfiction. She lives in sunny North Carolina with her husband, a brood of critters, and an occasional foster cat. Although shopping is high on the list, her greatest pleasure is sitting on her screened-in porch, listening to the birds, sipping coffee and enjoying a good book. She’s a vegetarian and a Muay Thai enthusiast. Readers can find Sandra at sandracox.blogspot.com, on Facebook, or at twitter.com @Sandra_Cox.

It’s been a year since Saria Sands entered The Program, her last chance to stay one step ahead of a relentless killer. When bodyguard and weapons expert Ben Hammers sends her to a private yacht in the South Pacific, Saria agrees. But confined in close quarters together on the yacht, Saria can’t help desiring more with her mysterious protector.

Ben Hammers will do anything to protect Saria. She’s more than just a job. Protecting the innocent is Ben’s only way to right a wrong he’s kept hidden his whole life, a secret that has kept him from forming a connection with any woman, let alone the one he wants more than anything.

Ben knows he can’t let his guard down. But the more time he spends with Saria, the further he finds himself slipping…

ORDER INFORMATION
Bodyguard Pursuit is available for order at 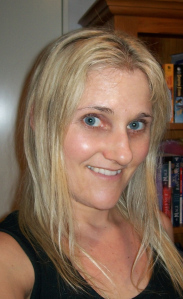 I love reading romance, but even more, I love to write it. My characters hound me, demanding their stories are told. I’m happy to oblige, giving them the romance they’re after, provided they can accept a little angst and adventure along the way. In beautiful New Zealand, I live with my hubby and four energetic children, and adore using the stunning countries of the South Pacific as backdrops in many of my books. One day I hope to travel further afield, to visit the Scottish Highlands, America, and everywhere between. Currently I have three series underway. Highlander Heat, historical Highlander romances, feature strong heroines whose paths collide with their delicious Highland heroes. Magio-Earth, is a fast-paced YA fantasy romance line, where across worlds, soul-bound mates battle against both love and land. And in Bodyguards, each heart-pounding story will bring you a bodyguard and the woman he protects. There is no greater feeling than seeing my characters come to life, so come and join me…where romance meets fantasy and adventure. 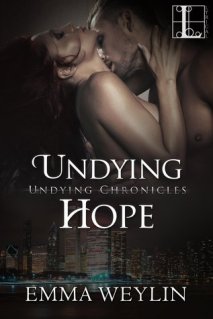 An ancient warrior. A timeless battle.

Haven Killian needs help. As the heiress of an ancient organization called the Black Rose, she is charged with keeping alive the line of succession. When she vows to protect a young boy tormented by magic, all she has to go on are rumors of an immortal with the power to save him.

As Battle King of the Undying, Quinn Donovan has the most powerful magic on the planet. Yet, he has waited an eternity to find his lifebond: the one woman destined to be his mate. The moment he meets Haven, he senses she is his. His instincts scream to protect the woman and the boy she guards, and to claim her as his own. But Haven is mortal, and for them to be united, she must become one of the Undying.

ORDER INFORMATION
Undying Hope is available for order at

Emma Weylin fell in love with the written word as a child. She loves to create her own worlds full of magic and wonder. One of her favorite things is populating those worlds with interesting and true-to-life characters who experience everything from epic love and heartrending battles to seriously silly or embarrassing “duh” moments. She believes love can and does conquer all things. When she’s not writing, she enjoys her family and has a copious yarn addiction.