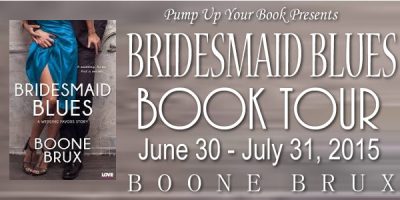 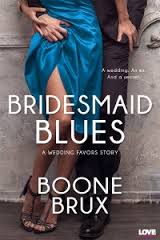 A wedding. An ex. And a secret.

Maid-of-Honor Dani Brown can handle anything that comes her way when it comes to her best friend’s wedding. That is, until the bride asks for a huge favor-Dani needs to distract the best man, who happens to be Dani’s ex. The ex she has fantasized dismembering for a year now. The ex she’ll have to suck it up and play nice with if this wedding is to go off without a hitch.

Businessman Jamie Kingsland is back in Seattle for a wedding. There’s just one problem – the maid of honor wants him dead. Except she doesn’t. Even though he knows he broke her heart last year when things got too serious and he panicked and left, she’s being way too nice about it now. And it scares him.

Something is up with his favorite bridesmaid, and he’s determined to find out what…

Bridesmaid Blues is available for purchase at

Boone is a bestselling author in both fantasy and series romance. She began writing in an attempt to ward of the slow decomposition of her mind while being an at-home-mom of twin toddlers. It soon became clear that storytelling was her true calling.

Her books range from epic fantasy, full of hot heroes and demons, to humorous urban fantasy, where hockey moms are grim reapers and Greek gods live next door. Though she loves writing romance, Boone prefers stories where she gets to blow something up or kill somebody.

She calls Alaska home and lives there with her husband, daughters, rescue dog, Oreo, and Velma Underfoot, a black cat who rules the house.